The gents have started their official competition season with a couple of additions. The new coach, Jan, was the former coach of the ladies, so he was already known by most of the older players. Some other newcomers are Jelle, Thijs, Wout, Guus, and Tim. Since the team has been demoted last year, it was hard to expect what the strengths and weaknesses of the opponent are. Despite this uncertainty, the gents were in high spirits when the match started.
During the first few minutes, the gents quickly gained the lead, with fast play and a couple of breaks. Oliveo had some issues getting started but started making goals as well, leading to a period in the match were the distance between the teams stayed the same. This was also the moment where it became apparent the gents had a fairly new team, as the play started becoming sloppy, with a lot of barely missed attempts.
After the break, this quickly changed, as the gents rapidly started gaining ground on Oliveo. What didn’t help was a hand injury of Oliveo’s goalkeeper, which led to them having no reserve players at all. The new goalkeeper didn’t have much experience, and that, combined with Oliveo becoming tired led to a final score of 36-18 in favor of Torius.
Of course, this was celebrated, and now we are looking forward to seeing what will happen during the coming matches. Hopefully, this is the start of a great season. 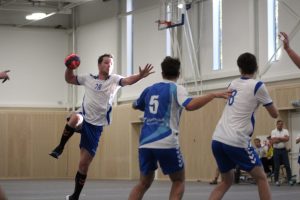 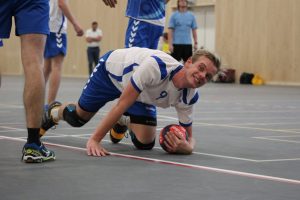 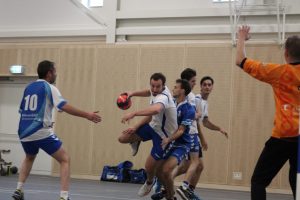